The question anesthesiologists always ask themselves when a person with a lung disease must undergo a planned operation, is whether this person is likely to develop severe postoperative pulmonary complications, or actual respiratory failure. To answer this question, many have recourse to preoperative respiratory function tests. But can the risk of postoperative pulmonary complications be predicted by clinical examination and respiratory function tests?

Yes, it is possible to predict the occurrence of postoperative pulmonary complications to a certain degree. This page discusses criteria for estimating the chance of postoperative pulmonary complications for non-thoracic surgery. The reason for this is that thoracic surgery, especially lung surgery, has somewhat different requirements than surgery performed on the rest of the body. To begin with, we must ask the question; "What are the performance criteria for the lungs of a surgical patient?"

What must the lungs do?

To begin with, the anesthesiologist must have a clear idea of what is expected from the lungs of a patient undergoing a surgical procedure. So what are the performance criteria for the respiratory system of a surgical patient?

How does the practical anesthesiologist proceed to assess the perioperative risk of postoperative pulmonary complications of all sorts in the light of these requirements?

Advances in respiratory therapy and care since the 1960's have undoubtedly improved these survival figures somewhat, but the reality of the relationship they demonstrate is still relevant - pre-existing disease increases the chance of dying. This is also clearly demonstrated by modern studies of longer-term survival of postoperative complications. One study of people aged 70 and older clearly showed that physical functional decline after operations was unrelated to the occurrence of postoperative complications, but more related to the presence of comorbidity existing at the time of the operation (Manku 2003). The message is the same - people with significant pre-existing comorbidity are more likely to die and deteriorate after undergoing major illness or a major operation.

This list makes it very obvious which patient categories and operation types can be considered higher risk. So when a person with pre-existing severe lung disease undergoes such an operation, the risk becomes considerably higher. What are the simple clinical indicators of higher risk of postoperative pulmonary complications? This brings us to an analysis of preoperative respiratory function assessment according to the basic functions of the lung.

Can the lungs get enough oxygen into the body?

How well do the lungs function in their task of getting oxygen into the body? Lung function declines as age, and so the PaO2 also declines with age, as is shown by the practical regression equation giving the decline of PaO2 with age for healthy supine adults (Wahba 1983).

Viewing the results of this equation in combination with the oxyhemoglobin dissociation curve reveals useful clinical insights. For clinical purposes, the most useful PO2 is the P90, the point at which hemoglobin is 90% saturated. 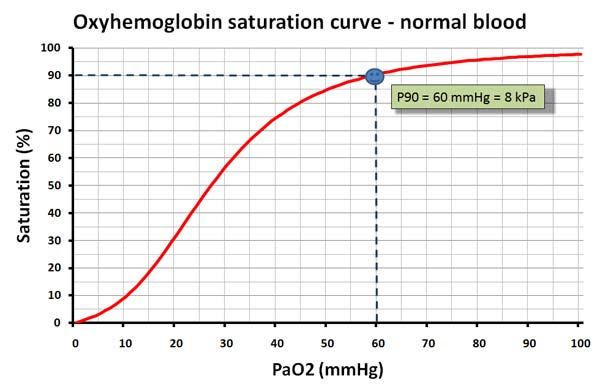 The P90 is the point below which a small decrease in PO2 results in a large decrease in SO2 and SpO2. So the P90 has several practical clinical consequences for preoperative assessment. Such people may well be at the edge of respiratory failure. So practical applications of the P90 are:

Can the lungs eliminate the carbon dioxide produced by the body?

Carbon dioxide is a normal product of metabolism eliminated by the lungs. But some people with severely compromised lung function cannot eliminate sufficient carbon dioxide though their lungs to prevent hypercapnia. Postoperative respiratory depression due to anesthetic drugs, opiates, and sedatives will worsen this situation, as will the effects of surgery on respiratory function. So which persons are likely to have carbon dioxide accumulation?

Carbon dioxide accumulation due to postoperative respiratory depression in people with pre-existing hypercapnia can cause an increased degree of hypercapnia, resulting in altered mental function, or even coma. Accordingly, practical clinical practice entails the following.

Can the patient cough effectively?

Lung secretions will accumulate in a person who cannot cough effectively. Accumulation of lung secretions can cause atelectasis, and accumulated lung secretions form an ideal substrate for bacterial lung infections of all sorts. Either of these events or both can cause respiratory failure. Practical clinical use of the PEFR is as follows.

Can the patient sustain an increased respiratory minute volume?

When supplemented with a clinical and functional history, all the above provides a logical step-by-step approach to assessing the risk of developing postoperative pulmonary complications and respiratory failure.