Some people tell of relatives who were "never the same since the last operation". Yet other people tell of personal experiences of reduced ability to concentrate, reduced attention span, and of memory problems after undergoing an operation. These changes are sometimes severe enough to alter the personality of the affected person, or to interfere with their ability to perform normal activities. These changes may even be so severe that some elderly people actually become demented after undergoing an operation. Such postoperative alterations in mental function have been described, discussed, and studied since 1955 (see discussion in Hole 1982). Unfortunately, many of the complaints suffered by those reporting mental changes after undergoing an operation under anesthesia are frustratingly difficult to measure objectively (Fassolt 1986).

All these changes in mental function occurring after an operation actually affect the process of cognition, which is why they are bundled under the term POCD (PostOperative Cognitive Disorder). Cognition is defined as the mental process of knowing, including aspects such as awareness, perception, reasoning, and judgment. Typical complaints of those people reporting POCD are:

An enormous amount of effort has been invested in studying this problem. The final view of this research is that POCD is a real problem affecting a significant proportion of people after undergoing an operation. Several studies excluding persons with initial stages of dementia, alcoholism, and those who underwent heart operations, reveal the following approximate figures for percentages of people experiencing POCD (Hanning 2005, Monk 2008).

These are fascinating statistics. They mean that undergoing an operation can affect the mental function in quite significant numbers of people, revealing POCD to be an unrecognized but significant form of postoperative morbidity.

The real world and selective blindness

Nearly all physicians, together with nearly all non-medical people, as well as the popular press, attribute these changes in mental function to the effects of anesthesia. Many of these people even believe that anesthetic drugs remain in the body for many months exerting a deleterious effect upon mental function. This is the real world of people who themselves have experienced POCD, or who have relatives who manifested POCD.

Most people believe anesthesia is the cause of POCD, yet seem to forget that administration of anesthesia is never done without a purpose. This is a curious form of socio-culturally induced selective blindness. No one undergoes anesthesia without undergoing an operation. Anesthesia is always administered to make surgical procedures, or an operation, possible. So POCD is always a consequence of the combined effect of anesthesia plus surgery upon mental function. In fact the effects of surgery upon the functioning of the body can be quite profound. For example, major surgery has an effect upon body function comparable that due to being hit by a truck, only the wounds are tidier. Recovery from such major injury also has a long-lasting effect upon mental and body function. There are also several other factors determining whether a person develops POCD. In fact, studies reveal reasonably consistent information about who is most likely to develop changed mental function after anesthesia and operation. These are listed below.

The great variety of factors predisposing to POCD, or altered mental function after anesthesia and surgery, means that there is not one single cause or mechanism inducing this unfortunate condition. Accordingly, POCD is not explained by the simple one-liner: "Anesthetic drugs linger for a long time in the body and cause POCD." In reality, what does happen is that the effects of anesthesia and surgery on the body interact with the body through a variety of different mechanisms within the body to induce a final chain of events expressed as the cognitive dysfunction manifested by those with POCD. So what are some of the possible causes of altered mental functioning after anesthesia and surgery?

So let us examine each of these causes, or predisposing factors

Residual effects of anesthesia, and painkillers

Many different types of drugs are used for medicinal purposes. To be effective the concentration of any drug must be above a certain level, otherwise that drug will not exert an effect. The body eliminates drugs by metabolism to inactive or other active forms, as well as excreting unchanged as well as metabolized drug in feces, or in urine, and sometimes even in exhaled air. The fact that a drug no longer exerts an effect upon the body does not mean that drug has been eliminated from the body - it simply means that the concentration of that drug within the body is too low to exert the effect for which that drug is used. Residual low concentrations of any drug may still exert effects upon the body as well as mental processes.

Anesthesia causes no pain, but operations are painful. Accordingly, people continue to use painkilling drugs after an operation to relieve the pain caused by the operation. The use of painkilling drugs may continue for days to weeks after an operation. Many drugs used to relieve pain also affect mental processes such as alertness, concentration, and memory. Opiates (morphine-like drugs) are good examples of drugs exerting just such effects upon mental processes.

Residual concentrations of general anesthetic drugs as well as the effects of painkillers explain many of the features attributed to POCD occurring during the first few days after surgery.

A surgical procedure is a form of injury, and the larger the injury, the larger and longer lasting the effects of operation upon the body. I discussed this earlier in this piece, comparing the metabolic effects of major surgery to being hit by a truck, only with tidier wounds. Everyone understands that recovery from such an accident with a truck will take a long time. Major surgery is the same. It also causes major injury to the body, even though the intention is to cure or manage a disease. Major metabolic changes lasting weeks and months occur in the body during recovery from major surgery (Hill 1993). 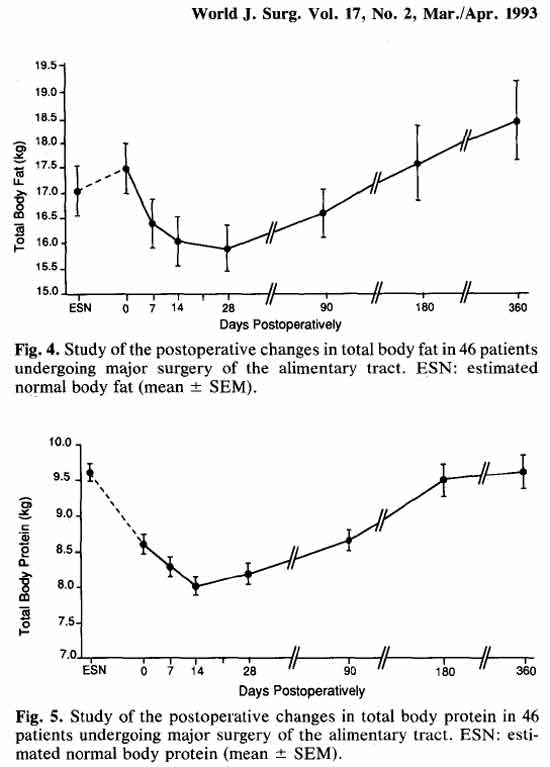 All these changes in body metabolism explain why people recovering from major surgery are easily tired, cannot concentrate, have memory deficits, and are not as alert as a healthy person for up to several months after undergoing major surgery (Rasmussen 1999).

POCD, or any other form of abnormal mental function developing after surgery is more likely in the aged than the young (Neubauer 2005, Monk 2008), in those with a high alcohol intake (Hudetz 2007), in those with lower IQ (Newman 2007), in those with prior history of a stroke (Monk 2008), those with pre-existing declining mental functions MCI (Mild Cognitive Impairment) (Silverstein 2007), as well as in those with clinically evident Alzheimer's disease or other forms of dementia (Meagher 2001). These facts mean it is likely these groups of patients have a diminished neuronal reserve, (also termed "cognitive reserve"). So when this cognitive reserve malfunctions due to the effects of drugs and the metabolic effects of surgery, they develop very evident subjective and externally evident signs of altered mental function such as: delirium, evident dementia, reduced alertness, inability to concentrate, and poor memory function.

Management of POCD or other mental changes after surgery

People reporting changed mental function after undergoing an operation should be taken seriously. The discussion above reveals this to be a real and serious problem, and one which potentially has an enormous impact upon the personal functioning of the individuals concerned, as well as a significant impact upon their surroundings and the societies in which they live. Management should be serious and efficient. Why efficient? That sounds cold and unpleasant. Actually, efficiency is of utmost importance. Delay and incorrect management reduces the chance of successful management, as well as increasing the distress of the individuals concerned and their families. Rapid placement of people into correct treatment regimes improves the chances of successful management, and means the incurable are placed in appropriate support programs.

Here are some personal thoughts regarding general management of POCD and postoperative altered mental function according to when they occur, and how long they last.

This discussion is short, and only touches on this fascinating, but very troublesome problem. Nonetheless, it does provide a starting point for understanding some of the possible causes of postoperative changes in mental function, by revealing these changes to be products of complex interactions between the minds and bodies of individuals with the effects of anesthesia and surgery. Moreover, it provides a way of explaining the causes of this problem to patients and their relatives.