Europe is aging rapidly! But it is not only Europe that is aging, nearly all developed countries are experiencing an explosive growth in the numbers, and the proportion of the population aged 65 years and above, while at the same time the numbers of children in these same countries has declined. The population statistics for some countries reveal how rapidly the age profiles of these countries have changed within a very few decennia. Moreover, reduced numbers of children in these countries ensures further continuation of these changes into the forseeable future.

The European statistics are startling, especially for Germany and Italy! As an Asiatic example, Japan is even more dramatic! In these countries, a dramatic decline in mortality was combined with an equally dramatic decline in the the numbers of children. In Germany and Italy, the increased numbers of the elderly is also combined with mass immigration of unemployable unskilled persons, all of whom burden current welfare and pension systems. As a result, these countries have considerable financial and social problems. Regardless of these considerations, these statistics clearly reveal that most developed countries face considerable problems, because more than 20% of their populations will be above 65 years of age as of the year 2030! Aside from the financial, social, and political consequences, this demographic situation has major implications for the provision of medical services. So what are the consequences of an aged population for provision of medical services?

The elderly often have multiple comorbidities

Population studies in Scotland (see Barnett et al), and Italy (see Lenzi et al), reveal that the number of comorbidities, both serious and non-serious, per individual increase with age. The graph below derived from data in Barnett et al reveals this in no uncertain terms. 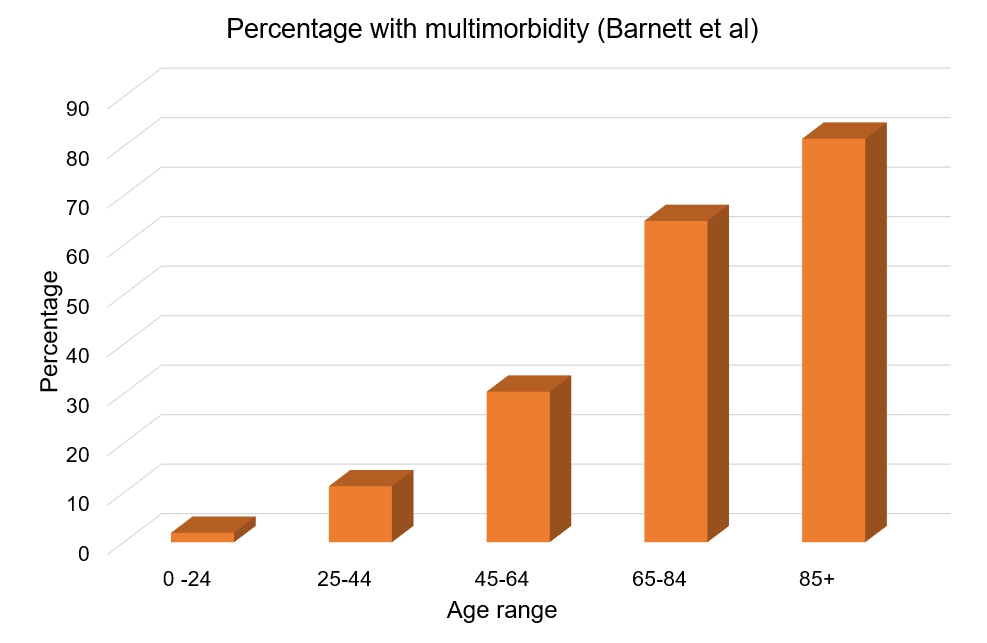 A future challenge for anesthesiologists — the elderly have more postoperative complications!

Increasing numbers of aged persons with their increased incidence of comorbid conditions is a significant cost factor in the provision of health services (see Picco et al). But anesthesiologists and surgeons are not directly involved in these aspects of healthcare — anesthesiologists and surgeons just want to provide safe and effective patient management. This is where increasing numbers of aged with increasing comorbidity impacts safe and effective patient management. A glance at the above comorbidity graph reveals that the incidence of comorbidity increases with age, and postoperative complications occur more frequently in persons with existing comorbidities (see McNicol et al, Shin et al). Assessing and managing the consequences of this problem, which occurs more frequently in the aged, is one of the major future challenges facing anesthesiologists and surgeons.

The “Perioperative Surgical Home” is one solution

The “Perioperative Surgical Home” is a relatively recently developed system of integrated care of patients before, during, and after undergoing surgery. Even now, in some hospitals, this system is achieving considerable success in reducing the chance of complications and death as a result of operations. The “Perioperative Surgical Home” is discussed in another article.